Many ports in the world are pivots of social dilemmas, such as coastal protection versus port expansion, attractive urban housing versus port activities, jobs versus automation, fossil versus renewable energy, and logistics efficiency versus strict border control. Such dilemmas can easily lead to conflicts if not managed well. In a mature port cluster, conflicting interests are usually accommodated by a settlement of differences, which is the outcome of a negotiation process. This approach suggests that the quality of cluster performance is a product of a zero-sum game - the gain for one goes at the expense of the other - or even a negative-sum game, when parties cannot come to an agreement at all. The biggest challenge of the 21st century is the development and implementation of methods that at the same time strengthen the economy and improve the environment, while making optimal use of the available space for port activities. One of these methods is serious gaming, which allows for better understanding of social dilemmas and mechanisms that drive decision making behaviour.

The first social dilemma – the Prisoner’s dilemma - was studied in the 1950s. A social dilemma is a situation in which firstly, each decision maker has a dominating strategy dictating non-cooperation, and secondly, if all choose this dominating strategy, all end up worse off than if all had cooperated. A non-cooperative course of action is at times tempting, because it yields superior (albeit often short-term) outcomes for the self. If all pursue this non-cooperative course of action, however, in the long run they are worse off than if all had cooperated. Benefits for the collective often occur over longer periods of time, and seem therefore less attractive.

This is exactly what port developers are facing in the process of planning and allocating space to port functions. Advancements in economies of scale, automated terminals, energy transition, more intense rivalry among ports and increasingly urgent demands from governments, labour unions and civil rights groups all must be incorporated in port masterplan planning. At the same time, port developers seek to establish a balance with what is often called the ecosystem, in which nature, people and communities, as well as clusters of companies, can co-exist. Serious games is an approach to innovate the decision-making process and can be used a simulation tool to overcome the bounded rationality which occurs in port planning.  A serious game is an interactive play, with or without a computer application, which engages the user with concepts of the real world to deliver a message, teach a lesson or adopt an attitude.

In Rotterdam, serious gaming was initiated as part of the Maasvlakte 2 port expansion project. This project was a cornerstone construction project for Rotterdam, not just because of its size, but primarily for its approach and complex stakeholder management. Competition in the Hamburg-Le-Havre range was (and still is) fierce. Already in the Port Plan 2010 of 1993 and in the Port Vision 2030 completed in 2004, the port identified the need for space for growth to maintain its mainport function for Europe. In 1997 the Dutch government decided to support Rotterdam and acknowledged that the port needs more space in the Dutch delta, but only when this could be done with respect for nature, the environment and quality of life in the Rijnmond region (PMR 1997). The port authority acknowledged the necessity to learn from the previous port expansion on the Maasvlakte, which was completed just before the first oil crisis in 1973, but turned out to become a prime location for container handling rather than a location for steel mill and related commodities, mainly iron ore and coal.

The port developers at the Rotterdam Port Authority realized that a variety of future scenarios was required to simulate the master planning and commercialization of newly developed port infrastructure in five different building scenarios. This is how the serious game SIMPORT MV2 was created as a co-production of TU Delft and Rotterdam’s Port Authority in 2005. In this game, the team is asked to choose the optimum mix between port infrastructure development while finding the best portfolio of customers in 30-years of simulated time. The first target group were port experts, but soon specific educational institutes were approached as well. Among Bachelor’s and Master’s students of TU Delft and the Shipping and Transport College, the game was one of the highlights of the curriculum.

More recently, SimPort-MV2 was replaced by Port Constructor, a so-called micro-game (Lukosch et al 2016) which has the advantage that it is played in short missions of 15 minutes and gives a more direct feedback on the implications of choices by the player. Another advantage is the user friendliness of the game. The players start with a basic port configuration, which consists of a basic layout with water, port basins and a port entrance by water. Students have complete freedom to allocate port functions and select port customers as long as three intertwining objectives are balanced: people, planet and profit. During the game, the players switch roles between the infrastructure manager who builds basic port infrastructure, the building manager who implements client contracts, the commercial manager who negotiates with clients and the stakeholder manager who informs the port users on the overall well-being via a strategic monitor (people-planet-profit).

Applied science institute Deltares developed the Port of the Future game to promote sustainable port development through a better understanding of how people can live in and interact with port development companies within a coastal ecosystem. The aim of this game is to create support and awareness for port development with all stakeholders: port authorities, planners, managers, policymakers, private companies, NGOs, scientists, nature developers, students and citizens. The game also facilitates policy-making in ports and a better understanding of interventions which are based on an integrated coastal policy via the coastal develepmont approach Building with Nature (Waterman 2010). Port of the Future takes place in a physical room, with stakeholders on three tables. Each stakeholder decides what port function to develop or intervention to make, which then will have to be negotiated with the other two stakeholders in the room. The overall concept of this game is to show the function and value of ecosystems-design in coastal engineering.

Social dilemmas in ports are omnipresent, but so are – increasingly – games which support in making more informed decisions. A serious game provides a safe environment to assess the interactions, interdependencies and subsequent impact of various functions in each other’s vicinity. A serious game can assist in focusing on a dilemma, learn from common ‘mistakes’ or malfunctions in spatial planning processes in a port environment. The focus of serious port games is shifting to include strategies which aim to tackle social dilemmas as a ‘win-win’ outcome rather than a ‘winner takes all’ outcome. Recent serious games are addressing collaboration rather than competition. Reaching shared objectives and developing a shared set of values seem to be more useful than mitigating conflicts. This approach fits well with strategies of port authorities which are increasingly embedded in the Sustainable Development Goals, thereby striving to raise economic growth while making societal impact through building partnerships, not in the least with stakeholders in the neighbouring port-city.

Acknowledgement
This blog has been written in the context of discussions in the LDE PortCityFutures research community. It reflects the evolving thoughts of the authors and expresses the discussions between researchers on the socio-economic, spatial and cultural questions surrounding port city relationships. Special thanks for comments and reviews to Paolo de Martino, Carola Hein and Andrew Littlejohn. 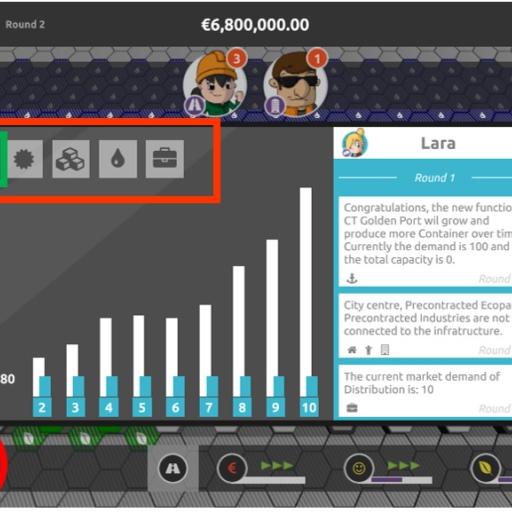