This episode of FRICTIONS focuses on the transformation of a maritime touristy citadel into an industrial port suburb in Pra’ – Genoa (Italy), social contestation and civic engagement of its citizens.

If Spotify is not available in your country, listen on Apple Podcasts or PodBean.

Guido Barbazza: “The port has destroyed 4km of very beautiful beach. Imagine, here we had 34 beach resorts before, it was a really nice touristic place, restaurants, hotels, and so on, so the harbour unfortunately destroyed all of this and in a way shacked all the citizens here whose lost their reference, the beach and the sea. Everything was founded on the sea here. The harbour has completely eaten the beach and it changed very deep this community.”

Pra’ is a citadel located in the western periphery of Genoa, Italy. Its identity has been transfigured by the long and troubled construction of a deep-water port.  Formerly a touristic seaside town, Pra’ is now hosting one of the largest container terminals in the Mediterranean Sea.

This is a story of the town’s forced maritime metamorphosis, social contestation and civic engagement.

Guido Barbazza: “We are talking about the biggest environmental disaster I know of this size at least in Italy.”

Guido Barbazza is a citizen of Pra’ and the founder of PRimA’vera Foundation. This association of local citizens is reclaiming the town’s quality of life, which has deteriorated with the construction of the port.

Guido Barbazza: “Pra’ was an independent municipality since ever, until 1926 when Benito Mussolini decide to merge this city, together with other 17 cities around, into Genova city to create a super city that had to become the leading city in the Mediterranean for shipping and maritime industry. This operation became a kind of colonisation by Genoa, which basically has utilised all the land, the sea, the beach of Pra’ to put the harbour, industries and very, very bad civil buildings, so basically tons and tons and tons of concrete. Here the community was mainly composed by agricultural activities, fishermen, ship builders since the old times buildings bricks and boats on the beach and all this kind of seafarer activities. So it was a city of sea and basil (the basil grown here in Pra’ is known as the best in the world). But as I said there was a very precise, clear same as many other cities on the coast of Liguria, which was completely destroyed by the port.”

The incorporation of Pra’ into Genoa, transformed the town into a suburb. With the intense industrialisation that followed world war two, Genoa’s western periphery became a hub for the steel industry, with Pra’ identified as the location for the new port.

Pra’s beach was converted into land for infrastructure, with the promise that the port would bring many jobs. Its hotels, beach clubs and shipyards were demolished; with fishing sites wiped out. The beach’s social function as a public space was finished.

As typical Ligurian territory, Pra’ is built on a narrow strip of land squeezed between sea and mountains. Here, the constant low and high frequencies of logistics resonating from the port create a kind of echo chamber. Cranes and stacks of containers are now in very close view from residential buildings.

Alessio Ponte: “The impact are huge and massive, with particular reference to the environment, also here we can hear a lot of noise, that is normal because there are ships, cranes, containers, trains, typical for that kind of infrastructure but it is not typical that this kind of infrastructure is so close to houses and to citizens.”

Alessio Ponte is a citizen of Pra’.

Alessio Ponte: “First of all, the impacts is the noise, the pollution from the ship, ships has to be supplied with electricity and the only way is to generate it on board, use, making pollution. After that of course other impacts are that the territory was completely transformed and we lost our shore.

I have some memory, flashback of the protests in which all together with all the citizens of Pra’ we walked down the street towards the institutions to protest, to witness our unhappiness, in seeing the port becoming more and more larger, with no care for us. Fight is the proper word that defined that period because there was not the will by the institutions to hear the citizens complaints, so the only important thing was to build the port, without caring about fishermen, people, quality of life of us, and it was very sad living in that time.

Maybe it was natural evolution of a feeling that everyone had in Pra’, of feeling abandoned from the institution, and our lives are just not important, let me say.

And then probably something has happened in our mind after a lot of year in which we protested, we changed our mind, a group of people moved from the protest to the proposal, trying to have a dialogue, trying to find which the correct people are to establish a dialogue and to put the focus on the problem, looking for a solution. It wasn’t a quick process, but since Fondazione PrimA’vera appeared on the scenario, something started to move quickly and some results are now coming after seven years of activities, a short time considering all the institutions and all the actors involved, Port Authority, local administration, national administration, terminal conductor form Singapore that is faraway from our problem let me say.”

PRimÀvera Foundation was launched in 2014, when the inhabitants of Pra’ were protesting in the streets, in a climate of spatial and political alienation. The foundation wanted to channel the contestation into a means for gaining territorial agency.

Guido Barbazza: “One of the reasons why Fondazione PRimÀvera was created was because I really saw the people sad really sad, without hope, with all this massive construction and demolition works around. We have discovered a huge heritage, a big energy, a lot of people really willing and wishing to do something, because the situation was unacceptable and it was going on since 1970 so 40-50 years of works and activities, first to construct, to make the harbour and then to operate.

The citizens were and are asking to get concrete actions to minimize the impacts of the harbour of Pra’, of the city, of the quality of life, of the territory and of course of the environment. So, not anymore talks, as unfortunately happened for long, too long time in the past, but concrete joint actions in cooperation.

One of the steps was to create a local newspaper, digital, in paper, a magazine to inform the people, because believe it or not, what happened here in the past decades was not known by the people. So people were waking up in the morning and saw tracks unloading muds and other things, sometimes even something toxic and didn’t even know what was going on.

The anger of the people in the past was so high, people were so angry at people who designed and done this disaster, environmental disaster, that I think the dialogue was impossible because people just wanted to see the harbour disappearing. So it was quite delicate, not easy, to convince this people that they liked it or not, the harbour is here, you can’t forget it, you cannot turn your head and say the harbour is not here and we will throw it to the devil and that’s it. The harbour is here, bloody hell. As it is here, we have to have a dialogue with the harbour to get the most possible benefit and advantage from this situation. So stop fighting the harbour as such, wishing and willing to this harbour to flourishing, but at the same time deliver money, deliver resources, to fill the gaps, to do works and activities to reduce the environmental impacts.”

Davide Siviero: “The port of Genoa, not only Pra’, produced three o four billions revenues per year for concession to terminalist, taxes, duties, customs and everything, which is half of total income of ports in Italy, Genoa is the biggest port of Italy, but just a fragment of this profit remains on the territory and I think this has to change in the future because I don’t think it is liable that in 2021 territories in which infrastructures exist are not repaid from their negative externalities.”

The port’s lengthy construction, with its connected railway and highway, triggered urban deterioration in its surroundings. PRimÀvera has been leading interventions for improving such spaces, negotiating with port and city institutions. A buffer zone has been built between the port and the residential areas – a new public space with, benches, cycle lanes and green dunes, have been created in an attempt to reduce the port’s impacts.

Francesca Franchelli: “I witnessed important changes in the downtown of Pra’, I saw new pavements, promenades, parks, pedestrian areas, trees were planted and Pra’ became well kept. I really wanted to know who orchestrated this upgrade and so I discovered that was Fondazione PrimA’vera, I met the volunteers and I found them to be very energetic and determined to improve the community.”

Francesca Franchelli has owned a pharmacy in the centre of Pra’ since 2016.

Francesca Franchelli: “I also wanted to do something for this area we began to cooperate and last year we proposed a scholarships for students to realise projects for Pra’. Students presented five projects, they were put online and people voted them. And then we had a ceremony and it was wonderful. I am very proud of being part of this project.”

Ideas from local students have been included in a larger proposal aimed at improving urban spaces in the community. The project has been approved and it is about to receive 15 million euros from the central government.

Nico Calloni is a former ship commander and director of a marine service company. He is now retired and is the president of PRimÀvera.

Nico Calloni: “In the past the relationship between the village, Pra’ and the port was conflictual, and there were kind of demonstrations on the streets.

The future of Pra’ starts trying to forget the beach. The beach doesn’t exist anymore and today we have the port and we have to leave with it. Also the port needs to ask itself what it can do for Pra’, because the activity of the port is creating noise, atmospherical air pollution, problems for the life of the inhabitants the people of the port. There are medical statistics, I think medical is correct, that say that Pra’ has one of the highest level of oncological disease in the city of Genoa.

Port Authority and terminalist need to understand that they need to give something to the village to reduce the effect of the port activity in terms of evergreen barriers, green spaces, areas for sports, young people, for walking, to do something to improve the life quality of Pra’.

In my opinion today is that we are much better because Fondazione is one of the part always present in all the discussions that involve the problem of Pra’. All the problems concerned with the port. There is a fact about what I am sure, that we can solve any problem that may rise in the future, by using only one element, which in my personal opinion is fundamental: the respect – the port must respect the village and the village must respect the port, because both have their needs. The port must do its job, the village must have a good level of life.”

These interviews were recorded in Pra’ in July 2021. The author wishes to thank Dr Beatrice Moretti. 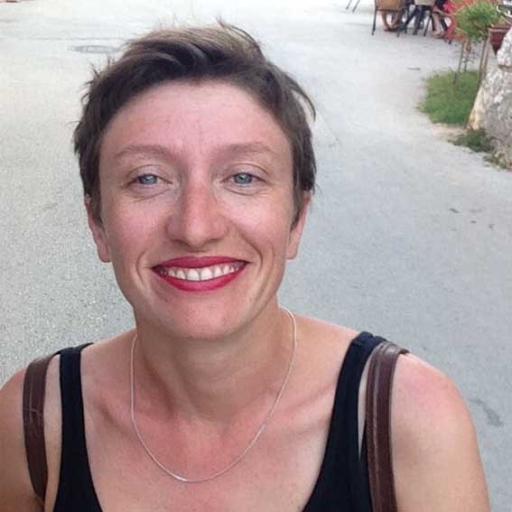 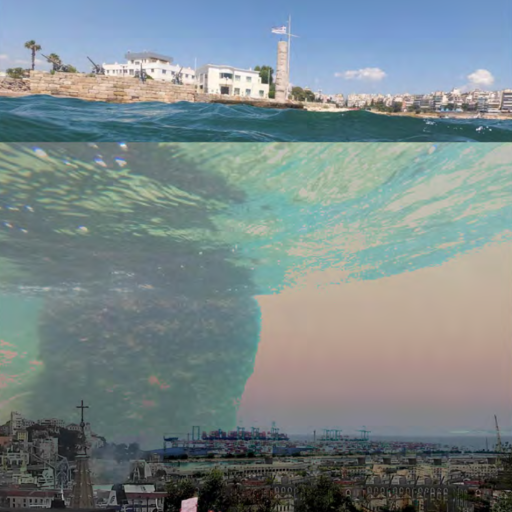