Trade infrastructure and logistical activities have long been a source of prosperity as well as nuisance.  Important trade hubs, such as Rotterdam, have built strong trade institutions and accumulated urban wealth, thereby making a successful trade-off between the global gains of trade and the local pains of congestion and pollution. Since the rise of global supply chains, however, such hubs have grown beyond their city boundaries and formed logistical hinterlands.  In the hinterland of Rotterdam, the building footprint of logistics has increased fourfold since 1980, while congestion and labour shortages have also increased steeply. Can hinterland logistics be regarded as a spatial justice issue, and how is this reflected in the local spatial planning debate in The Netherlands? This blog article is a short preview of a paper that will be presented during Aesop 2022 in Tartu, where spatial justice is a central topic.

At first glance, logistics planning may not seem like a spatial justice issue.  The logistics planning literature, however,  frequently addresses distributive problems: the benefits and burdens of logistics are not distributed equally in space. Extensive areas, like Rotterdam’s distribution hinterland, appear to represent a less-than-favourable trade-off between benefits and burdens, judging by the increasing criticism and protest against distribution centre developments, which would cause landscape degradation and congestion.

This conflict between regional gains of logistics developments and subsequent local pains in hinterland areas with vulnerable communities is illustrated by the Los Angeles region. While the regionalization of distribution centres along the Alameda Corridor has improved the air quality and congestion in downtown LA, and in general terms in the whole region, it has significantly worsened the living and working conditions in the Inland Empire region to the east of LA.

Since the gains and pains of logistics developments are felt on such different scales and among so many different actors, making a good trade-off is extremely difficult. While a company can seek an optimum of costs pertaining to e.g. the service level and location of a distribution centre, the societal trade-off is much more complex – involving changing political positions regarding a multitude of gains and pains. Societal cost-benefit analyses cannot fix this, since these still need interpretation and fail to factor in aspects like biodiversity or landscape quality, which are hard to measure.  Moreover,  spatial-economic models are not equipped to combine and evaluate this variety of positive and negative externalities. As a result, persuasive, coordinative and justificatory discourses remain key elements in deciding on large economic developments with environmental impacts, such as logistics.

To identify the discursive arguments of logistics developments in the hinterland of the Port of Rotterdam, the paper analyses regional newspaper articles as well as municipal council decisions in two Dutch cases of municipal logistics developments, both part of the busy East-Southeast freight corridor and reaching a climax in the public approval process in 2021: Wijkevoort (Tilburg, Noord-Brabant) and Klaver 7 (Horst aan de Maas, Limburg). 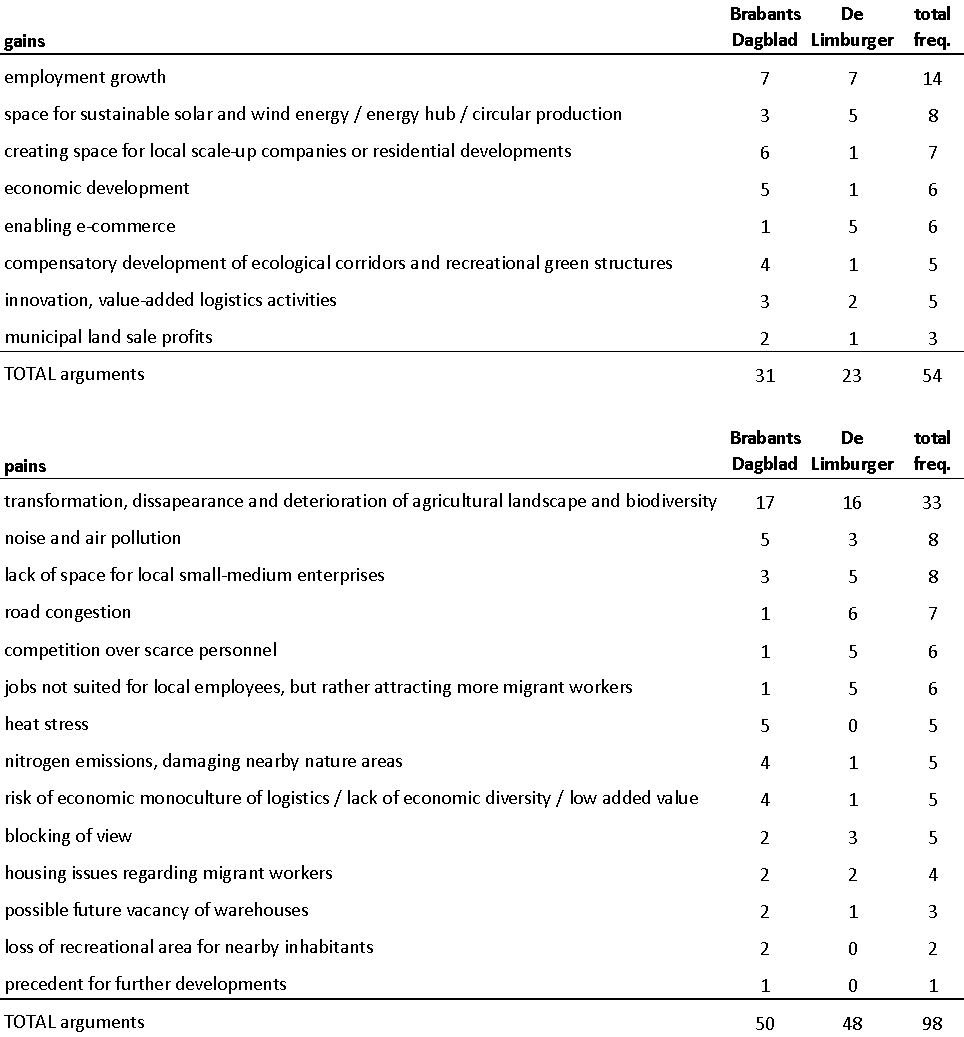 Some of the articles present only gain or pain arguments, the latter usually from the side of citizens: “Neighbouring inhabitants are not impressed. They feel like victims of the economy” (De Limburger, 10-03-2020). “Soon I’ll be looking at incredibly high walls. The sheer scale annoys me. And for whom is all this logistics? The benefits are certainly not for the people living in this region” (Brabants Dagblad, 2020-12-12). Many articles, however, (attempt to) reflect the trade-off that politicians need to make: “I can’t deny that Wijkevoort has opened up several lines of conflict. […] What’s more important is that the development of Wijkevoort makes the conservation of [the other proposed site] Zwaluwenbunders possible, as a green buffer […]. That is a package deal” (Alderwoman Lahlah in Brabants Dagblad, 11-03-2022). Most gain arguments mention that logistics developments generate  employment and create  space for either sustainable energy production or local scale-up companies. Most pain arguments emphasize the loss of agricultural land and landscape quality, as well as nuisances in the form of pollution and congestion. A cartoon by Berend Vonk in De Limburger (2019-03-14) showed a landscape packed with windowless buildings, containers, and billboards. It says, ironically: “Nobody understands how beautiful our Limburg is.”

The decisions regarding Klaver 7 and Wijkevoort follow a similar overall path, leading from the approval of a preliminary master plan or vision for the area a few years ago, after which discussion arises and in 2021 a decision is made: Klaver 7 is postponed until the end of 2024 when higher standards can be met, while Wijkevoort is approved – also with increased standards. These elevated standards (higher spatial quality and local added value) are explicitly part of the political negotiations in the council meetings, influenced by the media debate. Shortly before Wijkevoort’s decisive council meeting in November 2021, a talk show was planned with experts including the author of this paper. It was cancelled after complaints in Brabants Dagblad (2021-10-06) that key protest groups had not been personally invited. Alderman Van der Pol: “The very people demanding openness of affairs around Wijkevoort ended up shutting down the debate.”

Even though there is no centre-periphery issue like in Los Angeles, the Dutch hinterland regions do perform tasks (enabling e-commerce for example) for metropolitan centres and other regions. The question is whether hinterland regions can sufficiently capture the economic development and investments, in green areas and sustainable energy, in return. Some trade-offs, however, can hardly be made on the local level alone, such as the gain of enabling e-commerce for a large region versus local noise and air pollution. My advice to planners dealing with hinterland logistics issues is therefore to address trade-offs in all relevant layers of spatial justice – the paper mentions five: trade-off between regions, between social groups, between economic sectors, between citizens and companies, and between quality of life and economic development. These can be addressed by creating a policy context of transparency (especially around lobby by local and foreign companies), deradicalizing “nimby” agents and stimulating an open critical debate supported by facts and expert opinions.

Beyond this generic advice that concludes the Aesop paper, I want to highlight two specific opportunities. First, The cases show that – if the democratic forces are sufficiently organized – local small and medium enterprises can be weighed into the decision-making and can even gain priority over multinational logistics firms. Second, and in conclusion:Selective policies regarding logistics, such as Tilburg and the province Noord-Brabant are elaborating, further strengthen their logistical relevance through scarcity. Furthermore, they inspire other areas to adopt similar policies to deal with the resulting ‘waterbed effect’ of logistics developments that are moving their way. An example is the province of Flevoland.

Acknowledgements
Merten Nefs is a PhD researcher at TU Delft and works for the Deltametropolis Association. Contributions and suggestions by Tom Daamen, Christian Heerings, Carola Hein, Lukas Höller, Céline Janssen, Frank van Oort, Bas van der Pol, Roberto Rocco and Wil Zonneveld. The full paper features references and is accessible via https://www.researchgate.net/publication/361490472_Beyond_global_gains_and_local_pains_-spatial_inequality_of_hinterland_logistics. This blog has benefited from insights of the participants of the ABE016 course on Topics in global flows and dynamic landscapes: Port Cities between global networks and local transformations and was peer-reviewed by the PortCityFutures editorial team: Carola Hein, Hilde Sennema and Vincent Baptist. 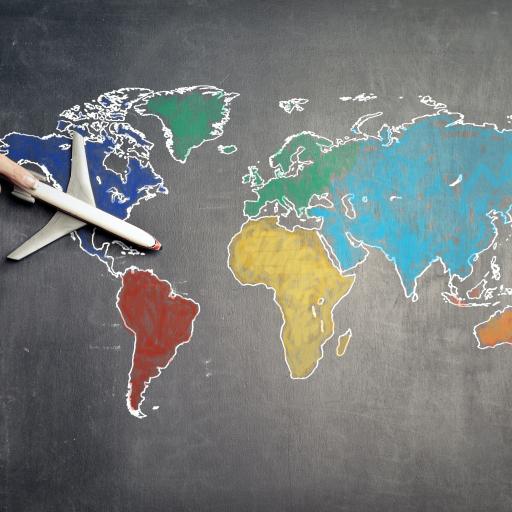 COVID-19: it is the logistics, stupid!