In Invisible Cities, Italo Calvino famously imagined Marco Polo describing imaginary cities to Kublai Khan. Reflecting on his home city of Venice, he “put together, piece by piece, the perfect city,” a city that is “discontinuous in space and time” [1]. The image of the contemporary port city similarly emerges from multiple pieces: port authorities promote the port’s efficiency and future potential; local governments advertise the heritage value of historical waterfronts and old portequipment as part of urban sustainability in all its facets; and artists and the general public write up and photograph these places. Collectively, these multiple groups create locality-specific port cultures across time.

Port Marketing and Port Authorities
Ports are built to efficiently move goods. Translated into numbers on speed and tonnage, their performance is the theme of glossy brochures and well-designed websites wooing new customers. Leading European ports position themselves as excellent not only in port functionality but in environmental friendliness. Rather than fighting activists who clamor for environmental preservation, Europe’s top port, the Port of Rotterdam, markets itself as a pioneer “continuously looking for answers to the question of how to do things smarter, more efficiently, better and more sustainably” [2]. 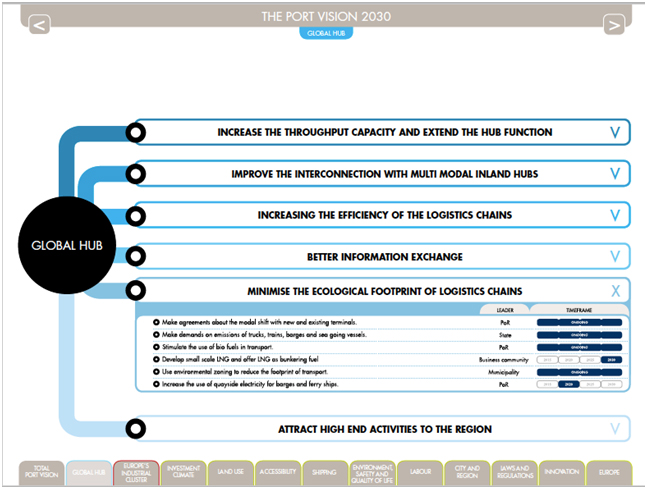 Port Vision 2030 of the Rotterdam Port Authority highlights the need to minimize the ecological footprint of logistics. (Source: https://www.portofrotterdam.com/en/the-port/port-vision-2030/implementation-agenda-port-vision-2030)

Similarly, Hamburg’s Port Authority has chosen the motto “Port of the Future 2025” [3] promoting itself as future-oriented and “paving the way for the efficient, resource-friendly and sustainable implementation of infrastructure projects in the port”. Environment and community engagement are key terms for the Port of Vancouver [4]. Yet elsewhere – in Shanghai, Dubai, and Marseilles, for example [5] – themes of speed and capacity are most prominent. The narratives of public, semipublic or private port operators can differ sharply from each other and from local branding.

Waterfront and City Branding
Port city governments and their waterfront representatives use both their working ports and the commodified remnants of former port activities (heritage buildings and former waterfronts) as brands. They feature these sites in booklets, flyers, apps, and other material for tourists, high-end employees, and locals. HafenCity Hamburg GmbH, a full subsidiary of the City of Hamburg, has an impressive array of educational tools, including publications, an info center and a large-scale model. The HafenCity Hamburg GmbH also hosts an extensive website, orchestrating historical analysis, accounts of technological change, and announcements of future development into an intricate description of past, present, and future. It showcases HafenCity as Europe’s largest urban redevelopment project; an organization with a forward looking agenda; and a company that responds to local and global expectations and social and environmental concerns [6]. The website iscarefully designed to attract a broad group of users, from investors to the general public, providing free access to extensive and varied documentation. It also features four webcams on ongoing construction projects (the Baakenhafen, the Campus Futura, the Elbphilharmonie and the Traditional Ship Harbour) and a ship radar tracking ships in real time, using technology to let users virtually visit the waterfront [7]. Writing the port city
Cultural production plays a role in the on-going construction of local port cultures, whether paintings, movies, literature, music, advertisements, or events. Cities hold port-themed events like harbour birthdays and cruise ship festivals; individuals’ photographs proliferate on Flickr, Dreamtime, and other platforms, amplifying their marketing power and adding to the partial pictures produced by other actors in the city. Furthermore, the number of historical novels located in port environments and in shipping circles in Hamburg, London or Amsterdam has grown rapidly, with books on the historic coffee trade in Amsterdam by David Liss and on the London Fire by Tom Finnek; perhaps most strikingly, Boris Meyn, who has a PhD degree in art and architectural history, sets his historical novels in the port of Hamburg. These novels complement other narratives and partial readings of city institutions and port authorities of the tangible and intangible elements of shipping, embedding an affinity with it in the imaginations of the larger public. Telling the story of the port city – its past, present, and future; its buildings and its people – is a strong force in creating port cultures. Specialized players such as port authorities, urban governments, and architectural historians have rediscovered writing as a tool to address a larger public and to nurture narratives of port and city. The internet facilitates the spread of this commentary through different disciplinary and language groups. Each actor creates a spatial and temporal picture of the port city, only partly representing the real city; together they both demonstrate the complexity of port and city interactions and create a local port culture. 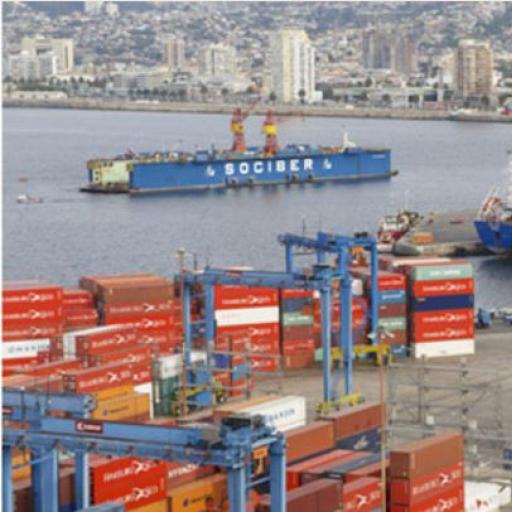