Why does Bucharest not have a port?

Bucharest is one of the very few capitals in inland Europe not accessible by waterways. The capacities of the Romanian capital’s rivers Dâmbovița and Colentina are far from those of a Seine, Volga, Elbe or Rhine. Yet, becoming part of a European network of port cities has been a long-standing ambition of Bucharest, which has not come without challenges. In this blog post, architect and urbanist Claudiu Forgaci tells the story of those challenges, raises questions about the sustainability of Bucharest’s port city ambition, and hints at a redefinition of port cities that might be more inclusive towards cities like Bucharest.

Bucharest emerged as a commercial and administrative centre halfway along a trading route (Mihăilescu, 2003) and military outpost (Harhoiu, 1997) between the Carpathian Mountains and the river Danube, in a landscape where the soil and subsoil were exceptionally good for extraction and agricultural purposes (Sfințescu, 1931). Szathmári’s Map of Southern Romania (1864) depicts Bucharest in the second half of the 19th century as a city growing between the rivers Dâmbovița and Colentina, at the time when it became the capital of the Principality of Romania. There was one thing that the city was lacking, however. Located at a considerable 60km distance north of the Danube, Bucharest was disconnected from waterborne trading routes. Most probably, the location of the capital stems from the fact that the Danube, the main navigation channel of the country, lies on the southern national border, which is too far from other networks within the country and too exposed to threats from across the border.

In spite of (and due to) this geographic disadvantage, several attempts were made to link to the Danube shipping route for more than a century. The first intentions of building a navigable canal date back to 1864. The first plan for a canal between Bucharest and Oltenița was drafted by engineer Nicolae Cucu in 1880, despite the fact that the small size of the river Dâmbovița crossing the city was not fit for navigation. It was only after 50 years, in 1929, when the initial intentions and plans were formalised and the government passed a law for a canal that would transform Bucharest into a ‘Danube Port City’, with a port located in the city centre. However, the recession of the 1930s brought the project to a halt. After a few years, engineer Dorin Pavel drafted a new project for a port and canal with sluices that would allow ships of 1000 tons to reach Bucharest. This project too was stopped, with the outbreak of WWII (Avădanei, 2012).

In the 1980s, the project was resumed again under the communist rule of Nicolae Ceaușescu, when flood protection and regularisation works started along the river Argeș. This time, a more elaborate plan was made, including three ports and the channelisation of the Argeș and Dâmbovița. The largest port, ‘1 Decembrie’, intended for the transport of goods, was planned along the larger river Argeș, and a second port was planned at Glina along Dâmbovița for passenger transport. The third port was planned at the confluence of Argeș with the Danube at Oltenița. Motivated by the completion of the Danube-Black Sea Canal in 1984, works started on the Danube-Bucharest Canal in 1986. They gained momentum and reached a 60% level of completion, before they were once again abandoned with the 1989 Revolution, when the radical and sudden shift from communist rule to democracy left most (if not all) infrastructural projects of the demised regime in a state of abandonment. It was not until 1994 when the works were officially conserved and the deterioration of the abandoned infrastructure was halted. Conservation works due to be finished in 1996 were never completed, and the concrete, crane tracks, and bricks from the construction sites were gradually dismantled. Just like Bucharest’s Văcărești Natural Park developed in an abandoned retention lake, the sites of the ports have been gradually taken over by vegetation.

After the regime shift, the project of the Danube-Bucharest Canal faced a lot of resistance. It was considered a utopian dream with very high costs, inherited from a highly blamed regime, with negative ecological impact, and involving extensive demolitions and expropriations. On the other hand, proponents argued that, if completed, the Danube-Bucharest Canal would attract more industries from the west of the country, as trucks would not have to cross the mountains anymore. With a significant shipping capacity, the Canal would reduce the costs of goods transportation between the Black Sea and Bucharest. Clustered with other plans for an innovation centre, it would also fuel development in the south of Bucharest, counterbalancing the capital’s extensive northward development during the post-communist period. Furthermore, it would bring benefits in terms of energy production, irrigation and flood protection.

The new millennium brought hope again with the bill for the complex improvement of the Argeș river and the resumption of the works on the Danube-Bucharest canal in 2001 (CDEP, 2001), followed by attempts to obtain funding as part of a European strategy for the Danube region. If concluded, the canal would allow for the annual transport of 20 mil. tons of goods, with additional benefits for irrigation and flood protection, as well as energy production for a large area between Bucharest and the Danube (Avădanei, 2012). Moreover, the project is motivated by the connection to the Pan-European corridor no. 7 and the larger context of planned developments in the south of Bucharest’s metropolitan area, including an international airport (BBC Romania, 2008). The Pan-European corridor no.7 connects the waterway networks of the Rhine and the Danube, allowing for navigable connection from Rotterdam to the Danube Delta in Romania. By connecting to an international navigation network, the Danube-Bucharest Canal would bring considerable opportunities for Bucharest. At the moment, the project is in a phase of planning and there is no indication whether and when it will be completed.

So, why does Bucharest not (yet) have a port? One might blame the failed attempts of the Danube-Bucharest Canal on bad luck. However, one might also argue that if Bucharest’s rivers had the capacity of a Seine or Rhine, navigation would have had a higher priority earlier in history already, and would have certainly developed more swiftly and as an important part of the city's identity. Instead, Bucharest had other urgencies to deal with. Water supply, flood protection, running the mills, and combating diseases caused by the presence of marshlands had higher priority than ensuring navigation.

It is only today, after (most of) those other urgencies have been taken care of, that the feasibility of waterborne transportation can be reconsidered. Although the increasing complexity and interconnectedness of today’s economy and physical infrastructures bring new challenges, they also present many opportunities. With advancements in automation and shipping technologies, smaller ships might be able to reach the two planned ports more efficiently and ensure considerable transport capacity. In the context of metropolitan, regional, and international strategies, the Danube-Bucharest Canal and its ports can also become a truly integrated urban project, maybe closer to the 1927 vision depicted in the Energia Magazine than expected.

Before jumping to the conclusion that a new attempt is due and that this time the odds might really change, two more fundamental questions need to be asked: Does Bucharest really need a port? And does it really not have a port? If the availability of a port is defined in economic terms and not in terms of proximity, then the relatively well-connected and strategically located sea port of Constanța, 200km to the East, and the Danube ports of Giurgiu and Oltenița do and could contribute better to Bucharest’s economy and need for its own port. On the other hand, even if or when the ports of 1 Decembrie and Glina are actually built, it is not certain that Bucharest will develop a strong port city identity in the foreseeable future. These pending plans could, however, contribute to a redefinition of what a port city is: perhaps more a network of cities in which port functions are shared, rather than one city with sails and containers on its waterfronts.

Acknowledgement
Claudiu Forgaci is Assistant Professor of Urban Design at TU Delft, teaching and conducting research on waterside urban areas at the intersection of urban design, analytics and resilience. This blog post was peer-reviewed by members of the PortCityFutures community, and edited by the PortCityFutures editorial team: Carola Hein, Hilde Sennema and Vincent Baptist. 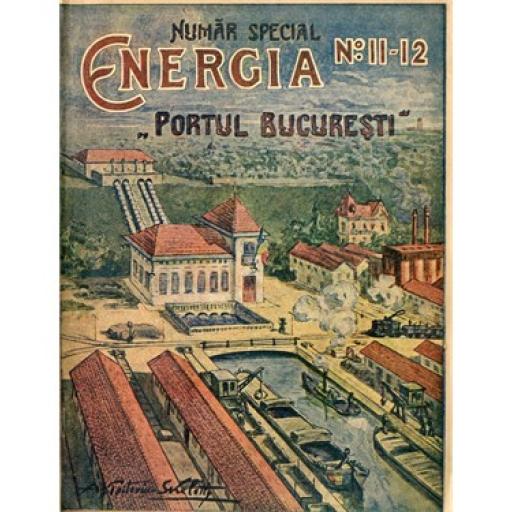 Why does Bucharest not have a port?