Who owns the city after all? Can sea cruise tourism help develop Amsterdam as a ‘City in Balance’?

The city and region of Amsterdam, together with the historical and cultural sights of the city, offers excellent facilities for ocean cruises, which contributes greatly in economic growth and employment. Meanwhile, a significant value conflict (Mager, 2020) exists among stakeholders. To deal with ‘over-tourism’ and maintain a ‘City in Balance’ (City of Amsterdam, 2016; Municipality of Amsterdam, 2019), since late 2010s the city has endeavored to take measures to reduce the number of budget travelers, and attract more higher-paying tourists (Aalbers & Sabat, 2012; Kavaratzis & Ashworth, 2007).

Cruise tourists, as a group of high-spending tourists, constitute a vital target group for Amsterdam tourism marketing. According to Amsterdam Cruise Port (2015), a non-profit organization working for the municipalities, authorities and businesses to serve the cruise industry, cruise tourists and crews bring the city and region considerable income and jobs annually. However, this contribution is not welcomed by everyone. Doubts about the ‘quality’ of cruise tourists were raised from inside of the Amsterdam marketing body and residents, criticizing that they arrive with the eco-unfriendly cruise ships, and always travel in large groups, causing traffic jams (Gerritsma, 2019; O'sullivan, 2019; Weezel, 2017). Since 2019, to balance the negative effect of cruise tourism, the municipality applied a ‘day tripper tax’ to tax every cruise passenger with €8 each day, to reduce the number of ‘stopping-over’ cruise passengers. Consequently, two cruise lines have replaced Amsterdam calls with Rotterdam to avoid paying such high tax (Montevago, 2019). A plan of moving cruise passenger terminal towards Zaanstad was also proposed by the city, trying to relieve traffic pressure in the center. This proposal, however, did not satisfy anti-cruise-ship activists in Amsterdam. The non-profit foundation Amsterdam in Progress has attempted to convince the city government not to implement this plan, because they fear the number of cruise ships and passengers will at least double due to the expanded size of the new terminal, which could even aggravate the over-crowdedness of the center (Gerritsma, 2019).  In May 2019, this residents’ initiative has ceased to exist out of frustration of the inertia and denial by the authorities.

The dilemma in Amsterdam is a clear example of residential interests and port user interests (Langen, 2006). The cruise tourism issue in Amsterdam does not stand on its own. Across the world, famous cruise port cities have initiated a dialogue with the ambition to develop sustainable cruising and establish guidelines for the ocean cruise industry of the future. Port-cities are on their ways finding the new equilibrium between quality of life for port citizens and economic growth for port, city and cruise liners. Port activities co-exist by the license they received from the public and requires. We argue that shared values can help resolve spatial planning issues generated by competing interests of a diverse group of actors, including port authorities, municipalities, corporations, cultural institutions, or citizens groups. Such an approach is based on trust, shared mindsets and on shared values of Amsterdam as a port city.

Acknowledgement
This blog has been written in the context of discussions in the LDE PortCItyFutures research community. It reflects the evolving thoughts of the authors and expresses the discussions between researchers on the socio-economic, spatial and cultural questions surrounding port city relationships. Special thanks for comments and reviews to Amanda Brandellero, Carola Hein, and Maurice Jansen.

Weezel, T. G. V. (2017). The Amsterdam cruise terminal is moving to relieve pressure on the city center, but the number of tourists can increase at a new location. De Volkskrant. 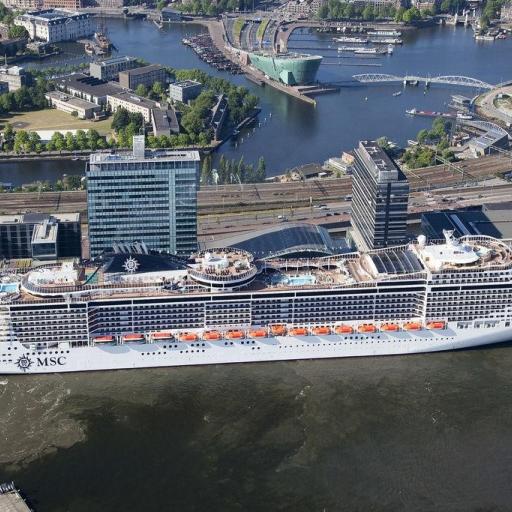 Who owns the city after all? Can sea cruise tourism help develop Amsterdam as a ‘City in Balance’?