Spiritism as the flagship of Modernity: Port cities and uncanny communications

For over a century (ca. 1850 to 1945) Spiritism was a popular field of entertainment, and port cities had an important role in the spread of spiritist ideas. While many studies and accounts of Spiritism characterise it as a cultural interpretation of the period’s rapid development of communication technologies – telepathy as a simple imitation, or rapping communication in the case of typewriting - these studies neglect how occult practices themselves contributed to new scientific, communicational, and industrial systems that where emerging in that moment (Noakes, 2016). By using the theoretical framework of Geoghegan (2016), in this blog I analyse two examples of how Spiritists built their proper networks of communication and ‘uncanny infrastructures’ through port cities: Bremerhaven and Barcelona.

On the 4th of April 1853, the Newspaper Augsburger Allgemeine Zeitung published an article entitled Dr. K. Andree: Geisterklopfen und Tischrücken in den Hansestädten [Ghost Knocking and Table Moving in the Hanseatic Cities]. Dr. Andree explained that the whole town had been in a state of excitement for eight days due to the arrival of the American steamboat ‘Washington’ from New York to Bremerhaven. Bremen had become America’s continental post office thanks to a contract with the Ocean Steam Navigation Company (Ocean Line) in 1847, which carried mail between New York and Bremen via Southampton monthly. In 1848, the ship carried 80.000 letters to Bremen and five years later the number had risen to 350.000 (Seija-Riitta 2018, p. 106). The ‘Washington’ had brought with it news about table-rappings so rampant in the United States.

Dr. Andree related that the phenomenon of table-moving was communicated in a letter dated on March 30, brought on that ship from a native of Bremen residing in New York to his sister, who was still living there. Her brother gave some instructions for reproducing the experiment in Bremen, which was attempted successfully at the lady's house in the presence of a large group, including Dr. Andree. The article was reproduced in several German, Dutch and French newspapers, spreading the trend of rapping tables throughout Europe. In a few days, the uncanny phenomenon flew as fast as the wind all over the country, and was executed by hundreds of experimenters not only in Bremen but also in Altona  (“Altonaer Nachrichten” newspaper 15th of April) and Hamburg, according to some sources (Horta 2001, p. 143).

Around 1850, the first spiritist publications arrived in Spain through Barcelona and València Ports. The French editor Maurice Lachâtre was waiting for a cargo of 300 forbidden books by the Spanish Church, among them Kardec’s The book of Spirits (1857) and The book of Mediums (1861). He arranged with the Valencian merchant captain Ramon Lagier and the Catalan notary José María Fernández Colavida that the cargo set sail from Marseille on board of the Lagier steamboat Le Monarch. On arrival at Barcelona, however, they were held by order of Bishop Antoni Palau, who burned them on October 9th of 1861 at Ciutadella Park in an ‘Act of faith’, a ritual of public penance condemning heretics, which was imposed by the Spanish and Portuguese inquisition and enforced by civil authorities. This act had the contrary effect. It increased the curiosity of the middle and working classes that saw the development of Spiritism as a project of social transformation.

The two examples illustrate that “shipping and overseas information transmission were unquestionable linked” in the nineteenth century (Seija-Riitta 2018, p.9) and that this was particularly true for the transmission of spiritist ideas, writings and experiences. The term ‘Spiritism’ refers to the belief in reincarnation and communication with spirits or souls of the dead, through mediums or psychically sensitive people. It was used as the designation of the followers of the particular spiritualist teachings of Allan Kardec (1804-1869), pseudonym of Hippolyte Léon Denizard Rivail, a French medium who had great influence in countries like France, Spain, Portugal and Brazil. As Spiritist phenomena travelled, local practices and conventions developed into standardized protocols, and a sophisticated technical vocabulary allowed for their rapid expansion and circulation. Spiritists fused complex scientific conceptualizations and demonstrations with political addresses, diverse techniques and instruments, embodied codes, therapeutic capacities, group meditation, performances of trance, etc. Geoghegan states that “the agency and efficacy of the Spiritist movement sprung from its ability to interconnect these heterogeneous elements into a scalable infrastructure that tied together millions of practitioners.” (Geoghegan 2016, p. 891). Through these proper infrastructures and networks of believers, Spiritists connected individuals, families, homes, societies and communities over the world.

One way of connecting was through journals, like the Revista Espiritista. Periódico de Estudios psicológicos [Spiritist Journal. Magazine of Psychological Studies], founded by the previously mentioned Fernández Colavida, which reported on communications with spirits channelled by mediums. In several of these communications, the spirits reportedly used metaphors of ships. A communication by seer mediums “F.L” and “Miss L.G”, and speaker medium “E.A”, for example, starts describing that there is a closer ship, a steamboat, a symbol of the XIX century with projects and illusions to fulfil, but also a second one, far away, a ship without steam and sails, driven by a strange engine: “Here navigation and shadows [steamboat]; there knowledge and light”. The crew of the steamboat is old and experienced, but aso tumultuous and weak, whereas the crew in the other is young, less experienced but far-sighted and studious, and embraces the new and prosperity. The long allegory ends saying: “you have seen that the steamboat that leaves is the XIX century; guess what is the ship that comes. Signed: a spirit”.

As the reader may guess, the ship that comes is a future embracing Spiritism. In the context of modern rapid changes in transport and daily life, Spiritism offered not only a distraction but also an explanation of the unknown: such as the future and what happens after death. The connection between maritime trade and the freedom of conscience (Barrington 2001; Driessen 2005; Seija-Riitta 2009) placed port cities at the forefront of articulating these new societal ideals among the population. The new forms of communication – over land, overseas and wireless - furnished powerful metaphors for Spiritist thinking about the movement of information from discarnate to incarnate intelligences (Noakes, 2016, p. 138). Spiritist communities, moreover, advocated advanced ideas, such as gender equality for men and women, secular education, and abolition of slavery. The Spiritist steamboat that the mediums referred to in the allegory, was bringing news about a better future yet to come. 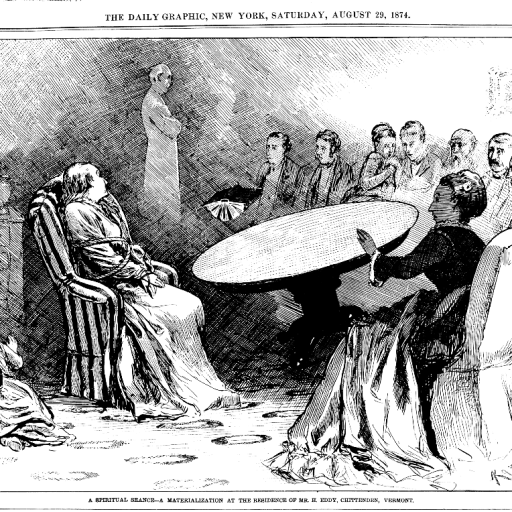 Spiritism as the flagship of Modernity: Port cities and uncanny communications