Reporting from the Workshop “Ti Porto a Bari”: A Landscape Exercise for the Port-City Relations in Bari

“Ti Porto a Bari” has been developed as a week-long experiential and experimental planning workshop, taking place in Bari, Italy, during the Bari International Architecture Festival 2021 (BiArch). Research on the borders between the port and the city was the pivotal subject investigated during the lab. From a legislative point of view, these relationships are being reexamined not only in terms of their meaning and values, but also regarding the planning, development, and use of commercial and public areas, in order to address contemporary conflicts and challenges of coexistence with surrounding neighborhoods.

The workshop’s two main sponsors, the Port System Authority of the Southern Adriatic Sea (AdSP MAM) and the Building Constructors National Association (ANCE) of Bari and Barletta-Andria-Trani, assimilated the previous learning experiences in Taranto and Brindisi to propose a landscape workshop coordinated by Prof. Michael Jakob and landscape architect Maria Cristina Petralla, with the contribution of architect Prof. João Nunes. The process sought a new methodological approach to design the borderline between the urban fabric and port areas, in order to better address the relational dynamics between the port authority, municipal authorities, and local communities. The goal was to reach an original, inclusive, resilient, and socially equitable interpretation of the subject matter, and to pursue the objective of integrating the functional and operative planning of AdSP MAM with a landscape architecture approach, thereby integrating green, blue and grey infrastructures. Therefore, the overall workshop attitude was as heuristic as it was ethical, scientific, and aesthetic, without neglecting the pragmatic necessities of the business world.

The workshop’s adopted methodology integrated some essential principles of the landscape architecture discipline: the attentive study of a place’s characteristics (history, evolution, morphology, environment, etc.); approaching the territory as an open-air laboratory to be explored by on-site study; critical understanding of the planning tools currently in force; and the interdisciplinarity derived from the different professionals involved. Moreover, the workshop aimed to implement certain operational principles: the engagement of students, professionals, teachers, researchers and local specialists to work together in a context of open discussion and mutual learning; the promotion of non-hierarchical and transversal activities; an in-depth focus on the relation between the quality of planning projects, of urban space and life in the city; and the integration of economic and environmental sustainability, through principles of resilience, reuse and revalorization within the design process. These methodological principles also resulted in an open public program within the workshop and the set-up of a public exhibition of the projects developed by the participants, leading to a showcase of international best practices, in continuity with the previous experiences from Taranto and Brindisi.

Divided into three groups, the workshop participants investigated the overall sea-land interaction along the port-city border, with a specific focus on three distinct areas. Below are the reflections of each group in response to the workshop’s leading questions: how can the theme of the “border” be developed within the work area and overall context of Bari? What were the most interesting aspects and experiences of participating in the workshop?

1. PARCO DEL CASTELLO - CityPort
Due to the reorganization of the port’s integrity, the area of Parco del Castello would have remained empty, facing a further lack of relationship with its surroundings: port and city. This provides a plea for intervention, since the starting point of the workshop was the reconnection between these entities. The main conceptual aim was thus to transform a “city with a port” into a “port-city”, fusing two separated elements into one holistic mechanism. The team considered that the port should not be a ghetto nor a suburb outside of the city, but that it should once again become the engine for the city’s development.

During the design phase, the team had the opportunity to confront different realities through interactions with the local community and the port authority, and to question the decision making for the port’s reorganization. While the team dreamed about a closer relation between city and port, it also faced the challenge to translate this into reality, dealing with the port authorities and the infrastructural and commercial constraints in situ.

Combined with the guidance of landscape architect João Nunes, participants found this approach to be truly stimulating. Ultimately, the project outcome was an outlined proposal for a continuous public space from Parco del Castello to the sea, which breaks the barriers of the road network, defines a structure able to change functions over time, and satisfies the needs of both port and city.

2. MARISABELLA - A mimetic port for the Marconi district
Marisabella is a vast concrete quay zoned for commercial purposes in the central part of Bari’s port, which is set to double in size within the next few years. Tall fences delimit the adjacent residential area, thus establishing a distance between the urban fabric, the port, and the sea. This impenetrable edge reduces the quality of the urban space and severs the community from the waterfront. However, the area offers great potential, thanks to the presence of large swaths of empty spaces and disused industrial and architectural complexes. These opportunities inspired the second participant group’s approach to seek an interpenetration between this spatial margin and its surroundings.

During the workshop, the team worked on the concept of “compromise”, in particular between the economic interests of the port and the citizens’ right to a high-quality urban environment. The objective was to introduce a less rigid margin, where the city and the port could interact. A modest canal of water emerging from a natural karst phenomenon became the starting point. The idea was to reimagine this element as a transitional edge, creating a dynamic linear park that behaves differently in accordance with its immediate border. This new configuration introduces a gradient of human and natural spaces to the built environment.

One of the group’s most relevant reflections concerning the port-city split was the acceptance that sometimes the reality is immovable, but it is still possible to mitigate those aspects that represent a problem for the community while creating new opportunities. A simple, feasible proposal arose from recognizing what the urban coastal landscape of Marisabella offered.

3. SAN CATALDO - A neighborhood marina
San Cataldo is a neighborhood incorporated in Bari’s urban area since the last half of the 20th century, characterized by a strong residential profile, but suffering from a persistent absence of public services, and increasingly dense vehicular traffic. Moreover, inhabitants are suffering from an interrupted visual contact with the sea, due to buildings in the port area, and surroundings becoming degraded. In this area, however, there are also the first bathing beaches in the northern part of the town, and residents enjoy sunbathing during summertime even along the waterfront. In order to come to a coherent proposal, the third participant group had to consider the ongoing transformation processes in the neighborhood as well: the projects for a lighthouse park and a new military dock.

The guiding principle of this group’s proposal emphasized the interaction between the San Cataldo district and the sea through newly distributed, compatible spaces and functions, also in the urban blocks and the immediate surroundings. A better relationship with the coast - by overcoming the traditional distinction between port and urban areas - could also be achieved through the fluid design of a new building, where all essential functions of the marina and the military area coexist, as a slightly shifted margin to allow more physical and visual openness from the neighborhood to the marina. Thirdly, the newly filled area could be preserved as public space to function as an “on loan-territory” - instead of a land stolen from the sea - where residents can enjoy themselves during summer and wave action is mitigated during winter. Furthermore, after an analysis of the needs of the local actors and target audience involved (residents and entrepreneurs), a proposal for a marina for medium-large boats was identified as the best way to enhance the specific features of the waterfront.

The proposal’s goal to emphasize San Cataldo's relationship with the sea was reached through the mitigation of the barrier that the harbor represents today, activating social and economic partnership between the city and the port in which both benefit. The direct collaboration with the Port Authority during the workshop influenced this final proposal. In fact, the harmonious solutions offered between the opposing needs of the port and the city were positively valued by all public and private stakeholders during the final presentation.

The workshop “Ti Porto a Bari” served the purpose of underlining the existence of a “port cityscape” (Hein, 2019), a landscape derived from the interaction of the urban morphology with the harbor fabric. In doing so, the recognition of the landscape as a shared cultural heritage can become a driving force for development perspectives that acknowledge its role as a rich palimpsest for future implementation. This workshop experience highlighted, among its most relevant outcomes, how the interdisciplinary and non-hierarchical workshop format itself functioned as a device to promote a more communicative and collaborative spirit for the port city of Bari. The common ground achieved during the workshop, by bringing together different actors involved in the decision making on the territory within a co-design environment, traces the path towards a more inclusive and consensual approach that can stimulate traditional institutional settings.

Acknowledgements
The workshop "Ti Porto a Bari" was financially supported by the Port System Authority of the Southern Adriatic Sea (AdSP MAM) and the Building Constructors National Association (ANCE) of Bari and Barletta-Andria-Trani.

The workshop was conceived and coordinated by Prof. Michael Jakob and landscape architect Maria Cristina Petralla, with the contribution of architect Prof. João Nunes and architect Anna Maria Curcuruto.

The photographs and drawings included in this article were taken and produced during the workshop by the participants and organization team. 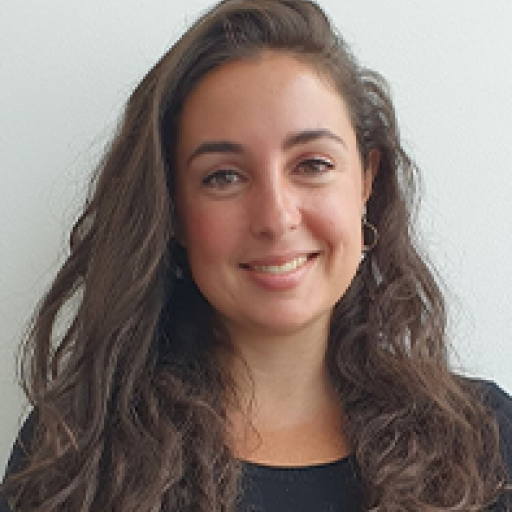 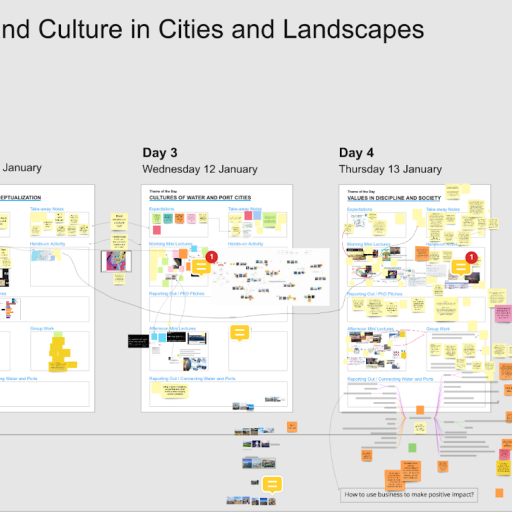 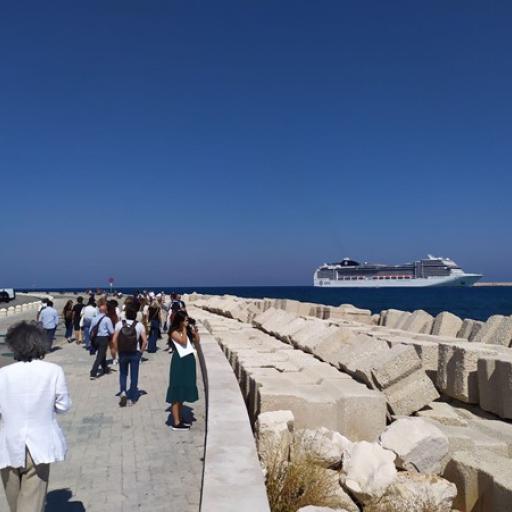 Reporting from the Workshop “Ti Porto a Bari”: A Landscape Exercise for the Port-City Relations in Bari