Dubai Free-Port Surging: Urbanizing the Sand into a Mosaic of Free-Trade Zones 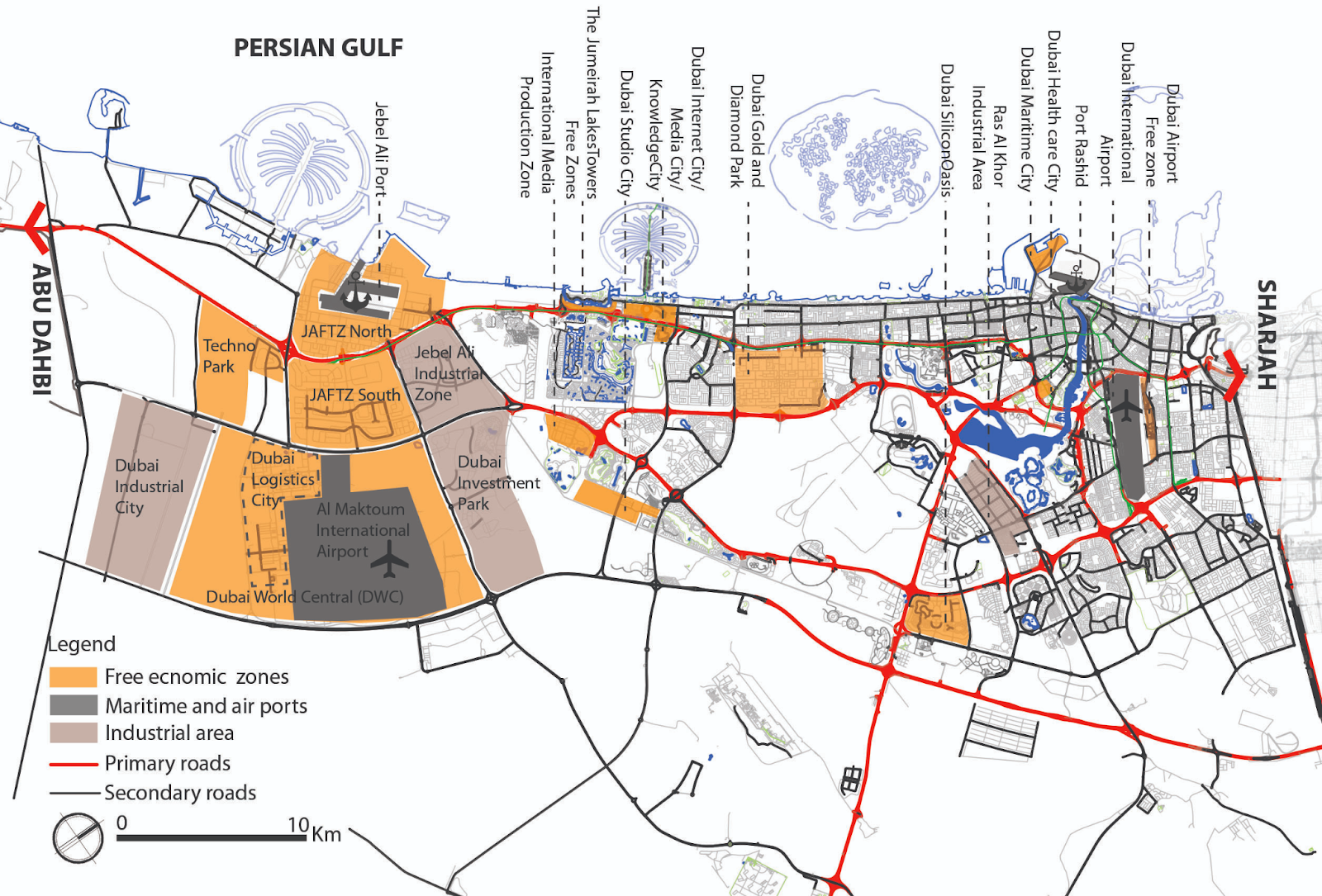 Maritime ports have long been a salient element of city-building and globalization. Besides tracing a truly remarkable model of infrastructural development, the particular case of Dubai in the United Arab Emirates can expand our understanding of how a free-port becomes an inspiration and driver for urbanization. Geographic, economic, and political conditions have provided great commercial advantages for Dubai. These new conditions have also shifted notions of what a port can signify in terms of connections to hinterland developments and other activities like manufacturing and commerce. With such new dynamics, city-port interaction does not simply weaken, but can actually also be strengthened (Akhavan 2017, 2020), as Mina Akhavan, currently senior research fellow at Politecnico di Milano, argues in this blog post.

Dubai’s urban development has one consistent element: its waterfront – first a modest creek, then engineered into a wider waterway capable of handling large ships. The original creek-side settlement transitioned from a fishing and pearling village into larger roles as entrepot, before arriving at anything like global city status. Likewise, the Dubai port complex can nowadays best be understood as a logistics cluster embedded in the broader global supply chain. Starting in the 15th century, Venetians, and then the Portuguese, the Dutch, and finally the British, already valued the Persian Gulf region as a trade route to and from the Indian and Eastern regions (Ramos 2010, Akhavan 2020). To protect its routes, Britain secured dominance, maintaining varying degrees of political control over territories that would come to include the states of the UAE, Bahrain, Kuwait, Oman and Qatar, from 1763 until 1971 (Edney 1997). Other than as points of transit, refuge, and incidental trade, port-hinterland interactions were modest during that period.

With greater potential for regional impact, Dubai established itself at the turn of the 20th century as a free-port (or “free zones” in later nomenclature) – a crucial mechanism for increasing trade and related urbanization.1 This strategy helped Dubai to become, by the 1930s, the premier re-export business port and the busiest port in the Persian Gulf. Up until today, much of the port city’s shipping is in fact transshipping: the same goods that come in subsequently go out, often with no change in substance. In volume and also somewhat in terms of types of shipments, change came strongly by the mid-1970s with the coming of oil to the region and vast investments in port infrastructures. Over the years, to accommodate more and larger vessels, the creek was widened and dredged. Eventually it became supplanted by a new artificial port, Port Rashid, constructed in 1972 adjacent to a central part of the city.

Even with a major expansion in 1978, Port Rashid’s tonnage growth rendered it inadequate to meet demands. The next move, then, was to construct Port Jebel Ali, close to the borders with Abu Dhabi and 35 km away from Dubai’s historical city centre. This new port was opened in 1979, as the world’s largest man-made maritime infrastructure. With substantial distance from the old port and also from other parts of the city’s infrastructure, a great deal of urban sprawl came along with it. With its massive twin-ports by the mid-1980s, Dubai became the main transshipment hub of the region.

While a project for Jebel Ali’s new industrial town was never realized, the surrounding desert area gradually developed into an industrial site and, with various large-scale projects, ultimately became an integrated logistics platform. Jebel Ali Free Zone (JAFZ) opened in 1985, adjacent to the port, and was another turning point in Dubai’s continuing development as a global transshipment hub. The decision to locate JAFZ as a pioneering ‘free zone’ project alongside the port was made with the intention to offer foreign companies easy access for unloading facilities, benefited by 100% foreign ownership  (Davidson 2008: 115).

The success of JAFZ has led to its institutional replication, such as with Dubai Technology Park, Silicon City, and the Dubai Airport free zone. Also of significance is Dubai Maritime City, Dubai Internet City, and Dubai Media City – all free zones with rules and regulations adapted to their intended function. They all fit within a larger strategy of mega-project cities within the city (Bagaeen 2007). Dubai has therefore further developed its free zones, currently accounting for more than twenty zones specialized in varied sectors such as trade, logistics, industry, finance, business services, communication, media and IT, research, healthcare, etc. (UAEstablishment n.d.). Free trade zones (FTZs) contribute significantly to the total trade: most recent data (2019) show that FTZs hit AED 592 billion, accounting for 43% of Dubai’s total trade, generating about 30% of the city’s GDP (Dubai Statistics Centre). Moreover, the FTZ development strategy in Dubai has been crucial in attracting (more than 17) global shipping lanes and (up to 120) global airlines (Kumar 2013).

Although not invented at Jebel Ali, the free trade zone model has had no bigger success elsewhere in the world. As such, it is a quintessential model within Dubai and the UAE more generally, which has now been implemented in other global regions as well. FTZs are a tool to attract external capital investment, and to exclude generated revenues from being absorbed by other public purposes otherwise regarded as parochial. Authorities relax taxes (or eliminate them altogether), decrease regulation on commerce and labour, in order to enhance investment and goods’ transit from local to global scales and vice versa. They thus facilitate and act at the interface of ‘territoriality’ and ‘transnationalism.’

Thanks to its ports, related infrastructures and FTZs, Dubai is now a logistics hub port-city par excellence, with a development pattern keeping up with the distinctive underlying forces associated with it. This development model is obviously different from Western models. Dubai does have commonalities with large port cities in Asia, for instance, which similarly rely less on hinterland symbiosis than the classic American model. Singapore and Hong Kong, with robust state planning and mega-port investments have been termed as following an “Asian consolidation model” (Lee et al. 2008), in which a few cities handle vast shipping tonnage for huge vessels involved in supplying large regions in the world. Nevertheless, Dubai also still has its own variations as mega-port and mega-city, including a lower degree of spatial concentration, given its open space environments, in contrast with the intense densities with which any development in Hong Kong or Singapore must deal. An additional characteristic is Dubai’s access to vast amounts of ambitious wealth available in the city, with minimal “red tape” or market constraint. Finally, compared to the Asian examples, Dubai’s transformation took place within a comparatively short and intense period (see Fig. 1). It ultimately also operates within particular modes of Gulf region neoliberal governance, including reliance on foreign expertise and massive importation of labour, under conditions judged unacceptable in many other parts of the world, including, at least in recent times, Hong Kong and Singapore. 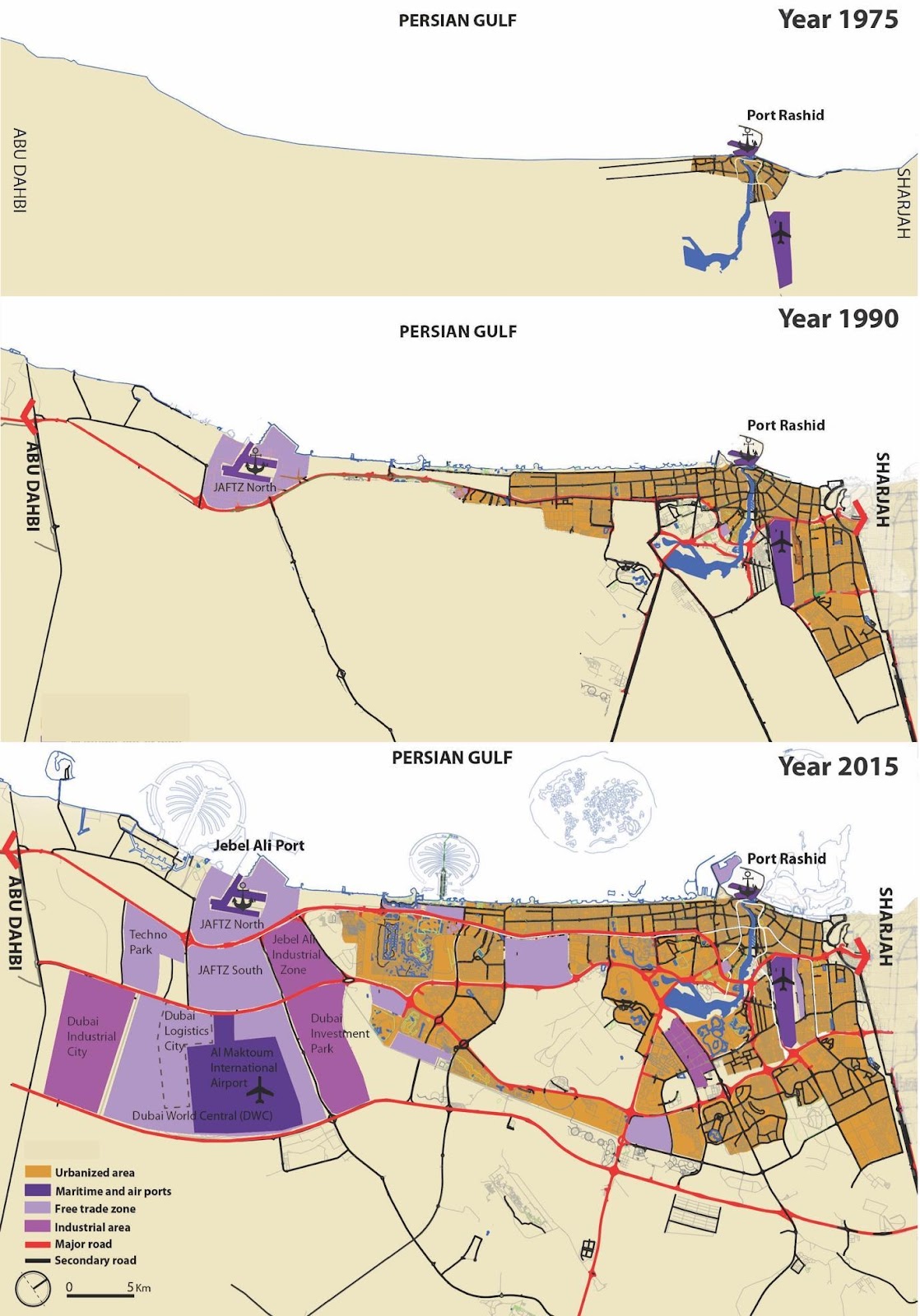 Mina Akhavan is a Senior Research Fellow and Adjunct Professor at Politecnico di Milano. From November 2022 onwards, she will be a MSCA Fellow at TU Delft.
This blog was peer-reviewed by members of the PortCityFutures community, and edited by the PortCityFutures editorial team: Carola Hein, Hilde Sennema and Vincent Baptist.

1 Sanspeur et al. (1996: 3) define a free trade zone developed for the purpose of a port, or a free-port, as: “usually designated area at a port or airport where goods can be imported, stored or processed and re-exported, free of all Custom Duties. It is a free area which normally falls under the authority of the port or airport management”. 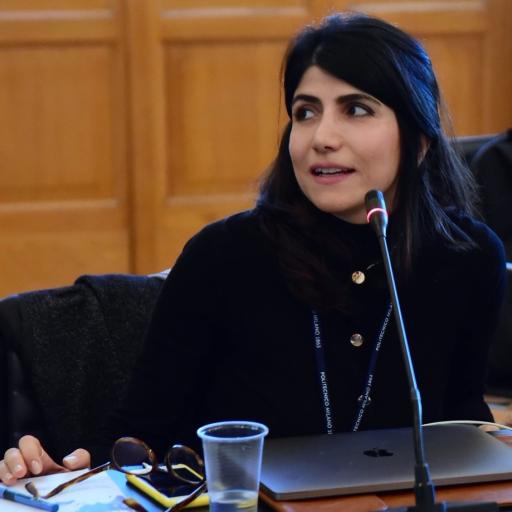