A waterfront regeneration project for the Port of Odessa

The sea port of Odessa is one of the youngest among European ports. Odessa was founded in 1794 with the purpose to create a commercial port for Russian Empire, which had just conquered the Northern shores of the Black Sea from the Ottoman Empire and had still no ports. The initiator of this endeavour was a Russian officer in the army of Catherine the Great named José de Ribas. De Ribas was a nobleman from Naples and was the first to understand the need of a port for the Empire. He chose the harbour of Odessa. The port developed very quickly thanks to the arrival of Italians, Greeks and Jews, who became the commercial spine of Odessa. The strategic drive of economic development was the status of Porto Franco (tax free zone), which turned the city into the fastest growing and most innovative of the Russian Empire.

Today, Odessa is the maritime capital of Ukraine, with 1 million inhabitants. “Big Odessa” is a combined system of three ports: the historical port of Odessa (adjacent to the city centre), Yuzhny port (the biggest private port of Ukraine and the deepest one), and the port of Chernomosk (formerly known as Ilyichevsk) port. These three ports handle approximately 75% of Ukraine’s total trade. All of them have a container rail connection to the ports of Klaipeda (Lithuania), Riga (Latvia) and Muuga Harbour (Estonia), which offers a quicker route to the Baltic Sea than the usual route via the Red Sea, Mediterranean, and North Atlantic.

Recently, the port of Gdansk (Poland) and the port of Odessa, together with private operators, inaugurated a project to develop a multimodal trade corridor for the route Turkey-Ukraine-Lithuania-Poland. Their aim is to improve cargo transport from the railway line Baku-Tbilisi-Kars, via the Black Sea, to Odessa port, to secure a faster delivery to Northern Europe and Baltic Sea. Odessa significantly increased its share of maritime cargo transportation from Asia to Europe, due to its favourable geographic position and Ukrainian exports, such as grains, sunflowers, and metals.

Although Odessa is a young port, it plays a crucial role in the maritime world because of its professional training system for seafarers and maritime management. Each year, about 12,000 Ukrainian and foreign students graduate at Odessa navy academies graduate for maritime careers. Ukraine is among the top-5 countries supplying qualified personnel to the international maritime labour market. The number of Ukrainian seafarers, working on ships of foreign ship-owners, amounts to approximately 120,000. Moreover, Odessa has a large concentration of recruitment and crewing agencies (over 350), which makes the city very competitive in maritime services for international ship-owners.

This strong maritime presence is partly due to the history of the port. The cargo capacity of the Odessa port agglomeration was initially designed to serve the Soviet Union with a population of 250 million people, whereas the current population of Ukraine is less than 42 million. With the collapse of the USSR, cargo turnover suddenly dropped to less than half of its previous level. The seaport area and pier length remained unchanged, but part of the seaport equipment became obsolete.

Today, the port of Odessa is still off limits to its residents, as has been the case since 1947. The waterfront is therefore not accessible for unauthorised people. The inaccessibility of the waterfront poses serious challenges to the redevelopment of this area. Nevertheless, an interesting chance for an urban regeneration project is offered by the abandoned area of the Shipyard-2, or SRZ-2 (Lidersovsky Boulevard 1). The area is situated between the Odessa Container Terminal of HHLA (Germany’s largest container operator from Hamburg), the city park Shevchenko and the boardwalk of the popular Langeron beach with hotels and restaurants. The site consists of several buildings and an inner railway. The poor condition of the area notwithstanding, it is occasionally the stage to art and social events. The position close to the city centre and the easy access from the park and the boardwalk, however, makes it an ideal area for a regeneration project. Moreover, the area houses some unique buildings, such as the wooden Naval Officers' Assembly of the architect Lev Vlodek, (who also designed Odessa’s Passage in 1899). The port building was erected in 1902-1903 and used until 1918. Today, the empty building is at risk of collapsing. As a whole, the destination of the area is still uncertain, partly because the property of the shipyard belongs to companies in liquidation.

There are also administrative issues holding back the development of the area. In port cities, the local government is usually involved in the port administration. The role of national, regional and municipal authorities in regeneration projects depends on the country's distribution of power between the different government bodies. Representatives from the city should participate in urban projects of the port, to allow the city to make decisions in cooperation with all the stakeholders, and involving the local community. Unfortunately, the legal framework for port management in Ukraine does not allow for such an approach: port land belongs to the municipality, whilst port property belongs to the national government. A new joint governance has to be arranged before any future regeneration project can get started. The presence of an international institution within this process would bring more transparency.

Moreover, Odessa citizens are usually not involved in urban development. They should be informed about future port projects and their impact on social, environmental and economic aspects. One way to do this is to create a public debate, where the community could understand the costs incurred by the city and which benefits it receives from port activities. There are plenty of examples to illustrate such plans, like the waterfront regeneration projects of Barcelona, Genoa, Oslo and Hamburg. It could even be advantageous, both for expertise in developing and planning, to collaborate with a foreign partner with experience in waterfront development.

Whereas a project of social regeneration in the waterfront area is a major challenge for a city like Odessa, it also would provide it with great opportunities. Waterfront regeneration projects have affected hundreds of port cities around the world. The opportunity to transform the above-mentioned abandoned area from a twentieth-century industrial wreck into an innovative area with tourist and recreational facilities would create a new relationship between the city and its inhabitants, and would significantly change the world’s image of Odessa.

References
Images are courtesy of the author. 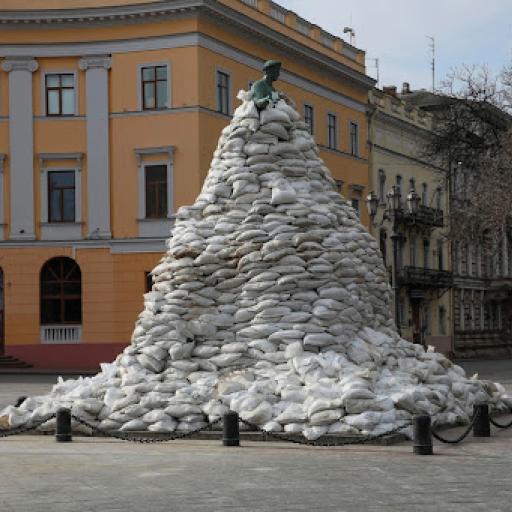